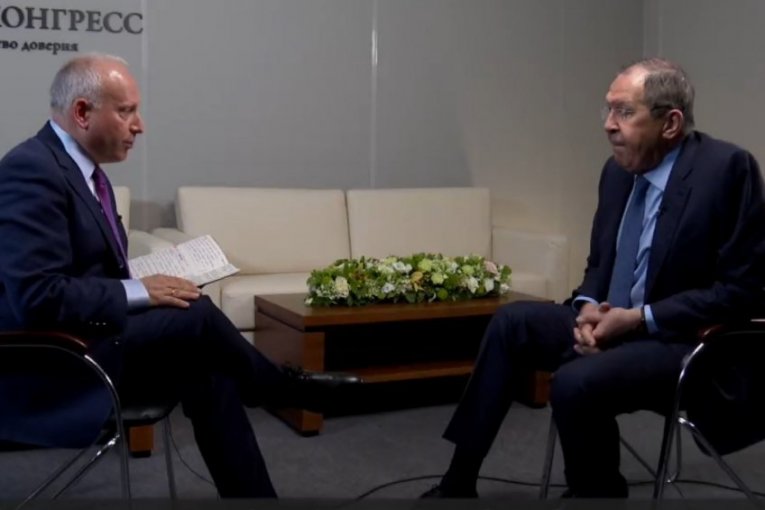 Russian Foreign Minister Sergey Lavrov gave an interview to BBC News Russian, and on that occasion he cut the journalist off in mid-sentence.

Russian Foreign Minister Sergey Lavrov gave an interview to BBC News Russian. BBC journalist and editor Steve Rosenberg did an interview with the Russian Minister of Foreign Affairs, and on that occasion he had a feeling of just how "difficult" of an interlocutor Lavrov can be.

In an interview with the BBC, Lavrov said that Russia did not invade Ukraine, but rather declared a special military operation because it had absolutely no other way to explain to the West that dragging Ukraine into NATO was a criminal act.

One question especially irritated Lavrov, who did not even wait for the journalist to finish asking him this, but rather cut him off.

At one point, Rosenberg touched on the two captured Britons who were sentenced to death by a court in Donbas as mercenaries, together with a Moroccan national.

The journalist pointed out that "in the eyes of the West, it was Russia that was responsible for the fate of captured foreigners", when Lavrov interrupted him in mid-sentence and said:

“Russia isn’t squeaky clean. Russia is what it is & we're not ashamed of showing who we are.” In an exclusive interview, I question Foreign Minister Sergei Lavrov on Russia’s invasion of Ukraine. Producers @BBCWillVernon @LizaShuvalova Cameras @AntonChicherov @LizaVereykina pic.twitter.com/yFccy6Vtiu — Steve Rosenberg (@BBCSteveR) June 16, 2022

When the journalist told him that the men had served in the Ukrainian armed forces and were not mercenaries, Lavrov said that should be decided by a court.

Speaking about the "special military operation" in Ukraine, Lavrov said that Russia was not "squeaky clean" and that they were not ashamed of showing who they were.

"FRIENDS..."! The scandalous Vitali Klitschko spoke out after an even more scandalous statement about SERBS AS OCCUPIERS! Here is what he said!