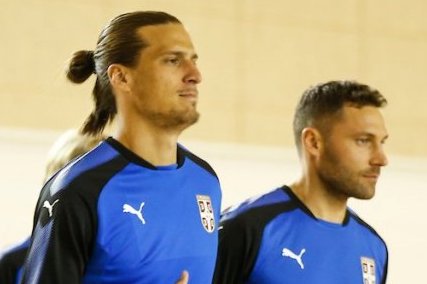 Former Serbian national football team members Aleksandar Prijović and Duško Tošić got into a fight on a raft in Belgrade.

The big incident took place during the night between Friday and Saturday around 1 am, in front of a large number of witnesses.

Portal Republika learned that the security took away the phones of those gathered and deleted the recordings in order to cover up the incident.

Prijović was allegedly the one who violently insulted Tošić first, after which he attacked his former teammate from the national team, and after the fight, the former Red Star defender picked himself up and left the raft.

- Prijović is angry with Tošić because he allegedly "ruined" an important transfer for him a while ago. Then he told him that he would beat him up when he saw him. Well, this was the moment when they met. Prijović obviously did not forget about that detail and as soon as he saw Tošić, he started to attack him - a source familiar with the conflict between the Serbian football players told "Kurir".

All those present, including a lot of football players, were shocked by the scene they witnessed.

Not everyone is meant to be a sports journalist: A gaffe on Radio Television of Serbia that made the whole of Serbia laugh! (VIDEO)

This is where Duško is spending his time after the divorce: Tošić sent a POWERFUL message to his ex-wife (PHOTO)