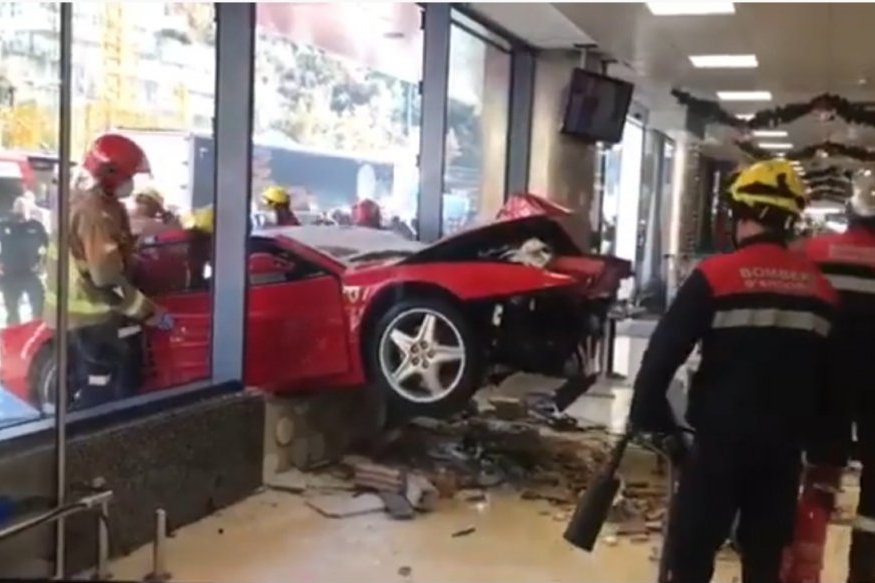 ELDERLY MAN (82) CRASHED A 200,000 DOLLAR FERRARI INTO A STOREFRONT WHILE IN THE COMPANY OF A MUCH YOUNGER LADY SITTING IN THE PASSENGER'S SEAT! An incredible accident shocked the world

Take a look at the footage of the accident caused by an elderly man from Andorra. It is believed that it happened because he wanted to impress his companion, but things got out of hand.

The Christmas mood on the streets of Andorra, a small peaceful country located in the Pyrenees between France and Spain, was disrupted by an unusual event, and shocked the customers who happened to be shopping at the time.

Namely, in the district of Sant Julià de Lòria, in broad daylight, a red Ferrari 512 TR crashed into one of the shop windows to the astonishment of all.

Local media report that the Italian classic was passing by a shopping center at high speed, and that by hitting the street barrier, it crossed several lanes and broke through the window of a store. Speed   is believed to have been a major factor in the crash, and a police investigation is underway.

- It may have been an unfortunate circumstance such as pedal error because an 82-year-old driver was behind the wheel in the company of a 59-year-old female passenger - a local newspaper reported the details of the incident somewhat ironically.

As it was stated, the female passenger was injured in the accident, as well as the saleswoman working in the shop where the car crash took place, so both of them were transferred to the hospital. The elderly man's companion was diagnosed with a mild concussion.

The red Ferrari suffered extensive damage and its front end was completely destroyed.

It is also worth mentioning that this is an exotic classic copy of the 512 TR label from 1992, an improved version of the cult Testarossa, of which only 2,261 were made worldwide. Its 4.9-liter 12-cylinder boxer engine has 428 hp and 491 Nm, which ensures acceleration from 0-100km/h in 4.8 seconds and a top speed of 314 km/h. Its average value is around 180,000 dollars, but the media from Andorra state that the crashed model must have been around 200,000 dollars.