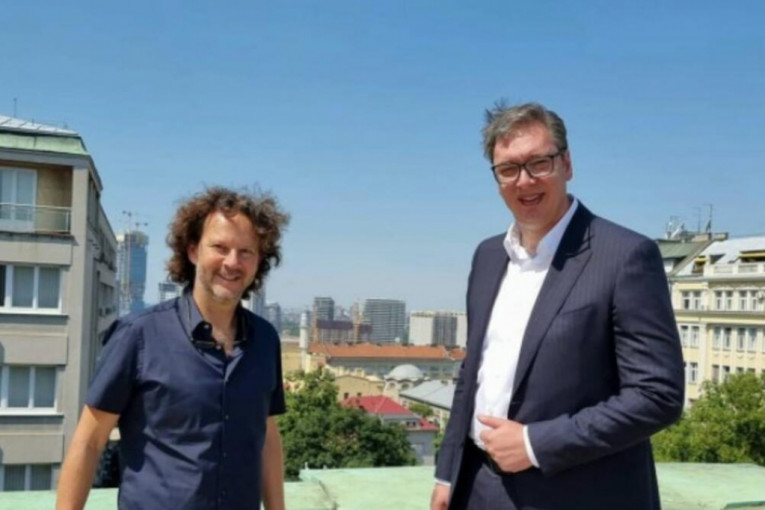 The President of Serbia has posted a photo of Ram Bergman and him on his Instagram account and he explained why it is important for world-famous movie stars to visit Belgrade.

- The filming of the movie "Knives Out" finished in Belgrade a few days ago and on that occasion I met with Ram Bergman. Apart from this movie, he also produced the last movie from the "Star Wars" film series. Ram promoted Serbia as a movie destination 15 years ago with his project "The Bloom Brothers", the President stated. He also added: "American movie 'Knives Out' directed by Rian Johnson was mostly shot in Serbia and during those few weeks, we had the honour of welcoming some of the most famous actors in the world, like Daniel Craig, Edward Norton, Kate Hudson, Ethan Hawke... Netflix bought the rights to two sequels of 'Knives Out' for the price of 469 million dollars, which means that this is the most expensive movie ever made in Serbia. This also means that 13 million euros were spent during the seven week shoot of this film - the President adds in his post.

- I spoke with Ram Bergman about making Serbia an even more prominent destination for foreign productions, and Ram promised me he would soon bring another big film crew to Serbia - President Vučić concludes.

GREAT HONOUR FOR SERBIA! Sheikh Mohammed announced: I had the pleasure of meeting Vučić! (PHOTO)

A GREAT HONOUR FOR PRESIDENT VUČIĆ: Burj Khalifa in the colours of the Serbian flag! (PHOTO)