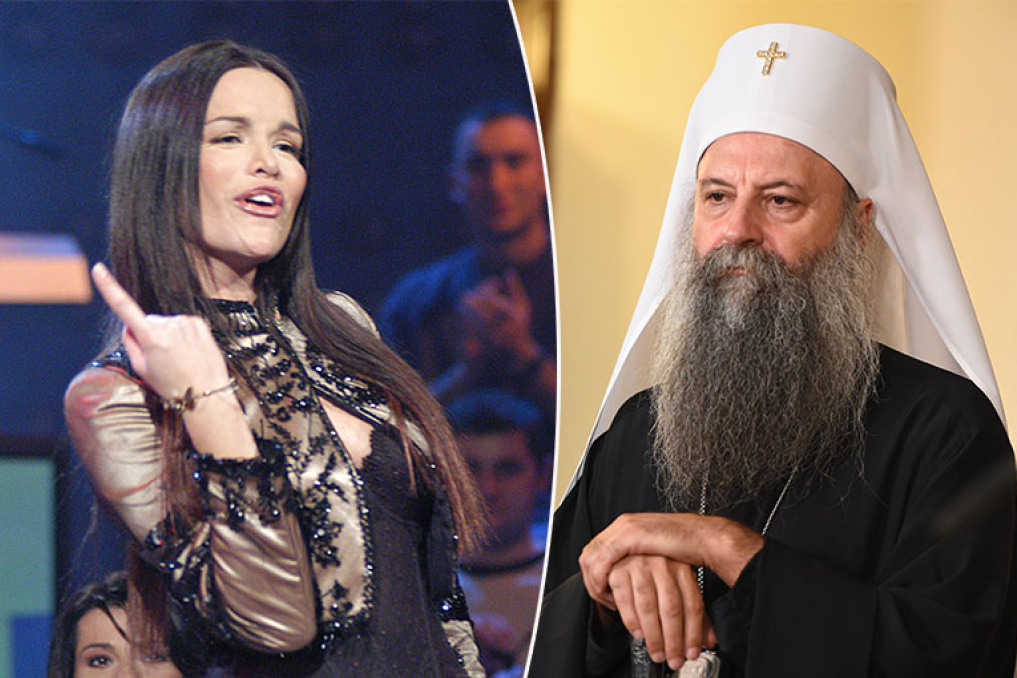 "Some priest you are! You are friends with criminals", this is just one of the messages, some of which are too profane and disgusting to be published.

As we were able to find out, the head of the Serbian Orthodox Church (SPC) has reported everything three weeks ago to the Croatian state prosecutor (DORH- State Atrorney's Office of the Republic of Croatia), which has launched an investigation against Severina.

She even started making phone calls

According to the information our journalists received from well informed sources within the Zagreb media circles, the harassment ( or rather persecution, since it can be also interpreted as such) started right after Porfirije had been elected Patriarch in February.  Severina was sending these messages to the Croatian phone number which the Patriarch had previously used, since he used to spend the majority of his time in Croatia due to his previous service as the metropolitan bishop of Zagreb and Ljubljana.

He had not reacted up until three weeks ago. At that time, the singer realised that he had not been responding or even reading her messages, so she started making calls to Patriarch's Croatioan pbone number.  As Patriarch Porfirije is no longer on duty in Croatia, he has started using a different phone number.

- A day or two after being named the head of the Serbian Orthodox Church, the Patriach started receiving these messages. In them, Severina uses the word "priest" when addressing Patriarch Porfirije ("Some priest you are! You are friends with criminals"). She wrote all kinds of things and used the kind of vocabulary that any person in their right might would find unimaginable. ( Let it be noted that the author of this text decided to leave out some of these messages due to their profane and disgusting content).  Patriarch Porfirije decided against reacting to this at first, but then he started receiving these disturbing messages, as well as calls, on an almost daily basis - one of our sources from Zagreb said.

As sources from Zagreb say, the Patriarch of the Serbian Orthodox Church has been received in the State Attorney's Office in the best possible way, as they had taken this case very seriously. This is not only because the  head of the Serbian Orthodox Church was at the receiving end of these messages, but also because the content of Severina's messages could be interpreted as a threat.

When talking about a potential motive behind Severina's mindless act, our sources point out that it could all derive from her hatred, fuelled by the good relations between Patriarch Porfirije and her former partner, Milan Popović. As a reminder, Severina and Popović are in the middle of a custody battle over their son Aleksandar.

Popović is a known as a generous benefactor of the Serbian Orthodox Church, as he has helped with rebuilding and equipping Serbian sanctuaries in Croatia, especially after the recent devastating earthquake. Porfirije also christened Popović's youngest son.

In hope of getting a comment about this case, we tried contacting the Croatian singer'a manager Tomislav Petrović, but we never received any answers to the questions we had emailed.

She does not miss a chance to sling mud at Serbs

This Croatian singer is previously known for inciting national hatred with her actions and for bad-mouthing Serbs. However, she does not seem to mind the Serbian money she earns from her concerts.

- She took the liberty to compare General Ratko Mladić to Hitler.  However, when Srpski telegraf pointed out that with all this said, she still had no problem with performing on a carnival in Vrnjačka Banja, she called out our newspaper for being agitators and stated that we should be forbidden from further publishing anything.

- She is also known for her statement that as all other children, her son will also learn about the history of Croatia - the fall of Vukovar and Operation Storm ( "Oluja"), so that he would grow up to be a good Croatian boy (even though his father is Serbian)

- The media have also written about the time she threw eggs at her neighbour in Zagreb, calling him a half-Serb

- The last incident on her list was on her recent concert in Montenegro, just before the inauguration of Joanikije II as the Metropolitan of Montenegro.  On this occasion, she addressed her audience with the following words: "You take care, my Montenegrins, don't let anyone mess with you"